This Master Remix exhibit at the Chico Art Center is the sort of group show in which I am particularly excited to see my work. I have three very different artworks in this show, too! 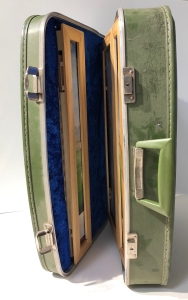 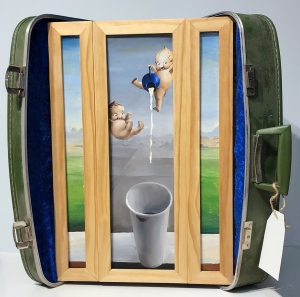 This extremely portable triptych reflects the fact that we carry our highly subjective understanding of the past into the present and future. The Kewpies (designed by Rose O’Neill in the early 20th century as playful comic figures with an enduring kitsch legacy) are the most straightforward nostalgic element of this artwork. Repurposing luggage as a literal framing element aligns the entire exercise of nostalgia towards the kitsch and away from the sublime. For those of us who ignore frames in favor of paintings, their central colorfulness and flanking black and white panels can nod to the iconic use of color in The Wizard of Oz.

These will be familiar to those of you who have been following my work for some time, but preparing them and updating their statements for this show was a productive chance to clarify in my own mind what needed to be said about them. With every artwork there is of course the risk for the artist of being unable to see the final result through the haze of all the things it might have been. Time and opinions from trustworthy people makes it easier to see one’s own work.

This pair of paper doll costumes comes from a series of symbolic anachronisms. The paper doll format alludes to the ways in which culture influences self-image. In this set, the painted costumes invite comparisons between Sandro Botticelli’s Birth of Venus and Naoko Takeuchi’s Sailor Venus. How much or little change has happened in the way we think about the power of female beauty and love? In what ways are these stories empowering, and in what ways can archetypes limit our expectations?

As I told one of the jurors who kindly included a mention of my artwork in his opening show reception, I feel my art has been truly seen for what it is in this exhibit. The application forms prompted artists to specify the artworks and artists most relevant to their art history focused submissions, but the signage in the actual show did a thoughtful and lovely job of expanding on that. It was the sort of inclusive signage that delights me (as a nerd who wants to share all the connections and references). 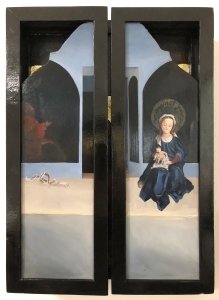 Colleen Wampole, Nor against yourself, oil on panel in custom hinged frame, dimensions variable, exterior and detail view, 2013

The hinged polyptych format intrigues me because it displays a series of paintings as physically linked while preventing you from ever seeing them all at the same time. It is a natural format for depicting a sense of the interior and exterior of a place or person. For this triptych in particular, I mulled over the Biblical commandment not to bear false witness. I came to realize that I was less careful to defend myself than others against damaging stereotypes and falsehoods. It was very interesting to realize what happened when I started insisting that I give myself as much of the benefit of the doubt as I would a close friend. The figures themselves are appropriated from a 16th century triptych by Jean Bellegambe.

The final polyptych shown is one which I was particularly delighted to share, because I ended up having a long conversation with some people at the opening reception about it. I’d struggled to present this artwork when it was fresh, and it was almost healing to hear these women’s articulate analysis. What they were getting from the artwork was absolutely compatible with what I intended, and for that I am grateful that they didn’t mind me inviting myself into their conversation during the reception.