The short version is that you should absolutely go see the special exhibit of German art at the Crocker Art Museum (on display until Feb. 14, 2016).

Albrecht Dürer’s prints and drawings are the highlights of the show, but the show as a whole is worthwhile.  Look for the magnifying glasses available for viewers’ use.  Some of those woodcut and dawn details are difficult to see…even if your eyesight is already top notch!

I couldn’t take pictures in the special exhibit, so I drew a lot of notes.  Drawing notes in museums does affect what you take note of (and how). 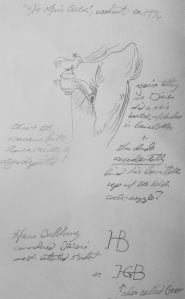 I had seen Dürer’s monogram (featuring an open door), but never fully understood that his family means door.  (According to the signage, it comes from his family’s previously Hungarian name, Ajto, which was translated to Tür.)

Now, if someone could just help me figure out the meaning behind that sheep hanging from Maximilian I’s necklace.  It’s repeated several times, so I doubt it’s devoid of meaning.  The version below shows the sheep pendant in question, though it’s not the same woodcut design that you’ll see at the Crocker.  (That version has an elaborate framing design by Albrecht Altdorfer.  The same necklace is in a 1614 portrait of Matthias I by Aegidius Sackler the Younger.  Sheep carcass means Holy Roman Emperor?) 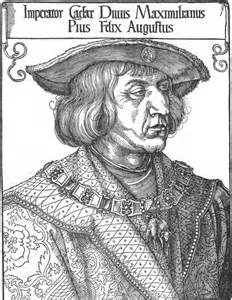 Something else to look for:  German printmakers from this era had excellent monograms.  (I couldn’t help but draw a few of my favorites.)

Within days of seeing this show, I had already recommended it to too many people for politeness’ sake.  I hope that tattoo artist looks Dürer up, because said artist was asking me for tips about how to do shading with a dip pen.  “Look up Albrecht Dürer,” I said, “because he is absolutely the artist to look to for examples of great cross-contour hatching.”  Mr. Tattoo Artist asked, “Do you think I’ll find his work on Instagram?”  I hesitated.  “Um…no?  The fellow lived several hundred years ago. But his drawings and prints are excellent and you should look at them anyway!”

I am the best at reviews.  “Just look him up already!”