Over last four months I painted an absurd number of self-portraits.  Their number stemmed from my struggle with reducing an entire person to a single expression.

It should be straightforward.  We all know the formula for your standard snapshot:  you look at the camera and paste on a cheesy smile (unless you grew up in a country that doesn’t do that).  Any deviation from the default smile can then be easily analyzed.  Right?

Coincidentally, I read this essay on the smile in portraiture the day after finishing my most recent set of paper doll self-portraits.  My portraiture and art history bias tends to the tradition of oil portraiture, so I could recite Jeeves‘s essay to explain why my most recent portraits (visible at the end of this post) are the first of my paper doll doppelgängers to smile.

The essay’s author mentions one of the best reasons why so few people in paintings smile:  holding a convincing smile for longer than a few seconds is difficult, and it takes far longer than a few seconds to capture a smile in paint.  As a painter who for years worked exclusively from live models, my only argument with Jeeves is that he should have mentioned this factor before any other.

Photography is the reason why it occurs to us to question why traditional portraits lack smiles.  The way in which most photographs are viewed matters as much as the speed of their creation.  A photograph in a scrapbook is seen briefly, as is the smile such photographs reproduce.

Painted portraits by their process and conventions are more suited to a timeless or anachronistic quality.  Paintings are often a constant, visible presence on the wall.  A smile sustained over such a period of time would be grotesque, so painted portraits are easier to live with if the expressions depicted are something that a person could plausibly maintain for longer than a moment.

Though I gave him a hard time for minimizing the importance of process, Jeeves’ essay provides a solid survey of the history of smiling in western European art history.  Like John Berger, he touches on the classist themes of who in history has been shown smiling and who remains dignified and professional.  (The exception to the general absence of smiles in figure painting is that of certain genre paintings.  These genre paintings often console the affluent art patrons that the poor are happy despite their poverty.)

In the case of my paper dolls, the choice between serious or smiling avatars is one of artistic authority or frivolity.  The simple choice to smile affects the entire tenor of the series.  The dolls’ costumes mostly derive from high art, which would logically suggest a dignified expression.

This month, I broke my usual preference for understated expressions in portraiture to acknowledge the fact that these are paper dolls.  The paper doll format itself is culturally coded as a child’s toy, which precludes gravitas.  Paper dolls are in spirit linked to the kitsch and exuberance of a snapshot more than the gravitas of the oil portrait tradition.  They are small, like snapshots.  As toys, the suggestions of enjoyment or fun are apropos. 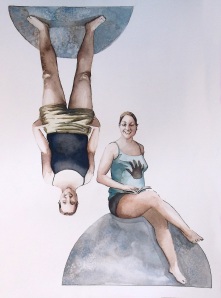 As the clownish smiles peeks through appropriated costumes from art history, the effect is also cheekily ironic.  The smiles let us in on the joke.  The laborious painting process is our clue that this is a heartfelt project.

As the homily goes:  this is “half joking, but all in earnest.”