”Shades of Santayana!  Those who cannot remember the past are condemned to repeat it; ergo, those who can remember the past may overcome it?  What does it mean, in a society replete with simulations and reenactments, to overcome history?….To liberate ourselves from punishing traditions?” (Schwartz 280-1)

Appropriation straddles disrespect and homage.  As Schwartz phrases it, “At one and the same neutered time, sampling is a signal of respect for and rebellion against those templates by which one’s time is fitted to one’s times” (310).  The paper doll costumes’ omission of faces parallels the sympathetic violence performed when poking eyes out of photographs, but the hand-painted quality implies reverence.  The foolishness of it harks directly to a mindset described by Dissanayake:  “making special” lends emphasis beyond that of accomplishing a task by the most economical or efficient means.

The commodification and repeatability of a digital image situates the artist in a position of power over the source imagery.  Digital transformation in scale and elimination of context requires a fraction of the time it takes to do same task manually.  The latter process is an exercise in humility.  Using watercolors increases the likelihood of failure, repeated attempts, and the admission that the painter aspires to a position of equality with the source imagery.  The action remains a cheeky appropriation of the canon, but occurs within a larger context of respect.

What, then, are elements of tradition and art history that deserve such ambivalent treatment?  What delights the eyes but horrifies the modern sensibility?  Does the canon of art history include an antidote?  These questions drove the decision-making process for my personal set of paper dolls. 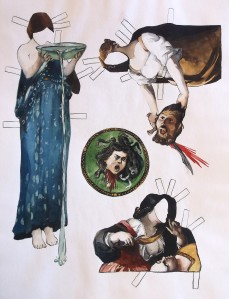 Some collections of costumes focus on themes I dislike but cannot escape.  Most of these artworks were painted by men whose virtuoso technique and entrenched position in art history books render them impossible to ignore.  Unfortunately, their artworks often exhibit blatant or benevolent sexism.  Examples include the virgin-whore dichotomy, the reduction of women to eroticized body parts, and the hypersexualization of underage girls.  Such depictions of women perpetuate the sexist paradigm that women are enjoyable objects or threats (but never fully actualized individuals).  Exposing the roots of visual tropes concomitantly highlights their modern incarnations and ramifications. 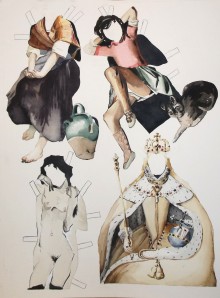 The structure of my paper doll series follows what Nanette Salomon identifies as two main strategies addressing lingering imbalances and codified sexism in the canon of art history:  “the appearance of women as critics and interpreters” and “the excavation of women as creators” (“The Art Historical Canon” 349).  The first half of Salomon’s strategy is employed in Figures 1-4.  Applying feminist concepts such as the male gaze to art highlights entrenched attitudes in the canon of art history.

Other collections sought out more empowering examples by focusing on women’s self-presentation over time (Figures 5-7).  They sometimes betray a self-consciousness that reflects the internalized male gaze.  It is important to remember that feminist writing often emphasizes individual agency rather than policing the form it takes.   Language and visual precedent shape, but do not determine, our thoughts about what is possible. 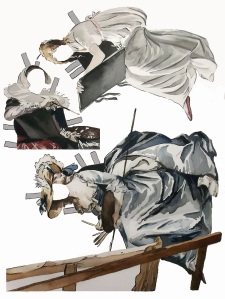 2 Replies to “Confronting and kowtowing to the canon”