This post continues to address the question “How can a person technically excluded from the canons of her field and religion relate to them?”, begun in parts 1 and 2.

An artist I admire gently but firmly informed me that my subsequent attempt to paint a version of a Jan van Eyck painting lacked humility.  The criticism was intriguing but inaccurate.  I never hoped to best Van Eyck’s consummate painting technique.  Posing submissively for the lady in green was surprisingly painful to my pride, but forcing myself into that pose became part of a larger project of self-assessment.

Van Eyck signed his Arnolfini Portrait with the faux graffiti Johannes de eyck fuit hic 1434, which this painting translates and transforms literally and figuratively to Colleen was here 2013.  Concomitantly, the convex mirror reflects my art studio in Philadelphia, twenty-first century women replace van Eyck’s couple, and the the artist’s friend withdraws her hand and self from the collaboration.  The more things change modifies van Eyck’s vocabulary to figuratively present a contemporary artist in her physical, political, and social context.

The polyptych In the beginning is less autobiographical, but still uses a combination of anachronism and mimicry.  Instead of manipulating an iconic secular image, this polyptych references visual themes from a subgenre of fifteenth-century European religious altarpieces.  The hinged format and trompe l’oeil double-take allude to revelation, insight, and contradictory points of view.  Tradition and progress contrast with the combination of grisaille statuettes, Biblical references, modern paperbacks, sticky notes, the Apple logo, and an e-reader. 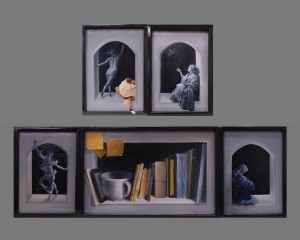 As with the van Eyck update, the influence of personal history and intellectual climate demanded impudent alterations to a standard of symbolism.  Basic familiarity with European art history should indicate that a nude woman holding an apple in a religious artwork is usually a reference to Eve and original sin, but there are other and more specific layers of meaning.  The contrast of the “real” apple on the outside and the Apple logo on the inside could be a code for disillusionment and the search for knowledge.  Wrapping that Eve figure in a quote from a previous chapter of Genesis is an obscure paradox.  To some Bible scholars, however, this combination repudiates the entire validity of ancestral sin, its use as an excuse for sexism, and literalist readings of the Bible.

You have to pay an unusual amount of attention to see more than one of these layers of meaning, but that is simply how paradoxes work.

The previous artworks artistically addressed the relationship of historical precedent to contemporary women.  A different parallelism results when the relationship or conflict is specifically that of an artist to her field’s canon.  Instead of pitting the anonymous viewer against art history, this diptych shows a fantasy of the artist entering art history to assess its misogyny.

This artwork is much more openly feminist than the others.  As Bartky put it in Femininity and Domination:

Philosophical reflection–indeed, any reflection–is always already rooted in some inherited schema or, as is more commonly said today, in some text; these texts are bound to be class-, race-, and gender-biased.  Hence, we must approach our tradition with deep suspicion; we must test its claims against our own hard-won insights; we must sort and sift among its materials to see what we can use and what we must discard. (19-20)

It is only natural to look for points of similitude and resemblance between myself and past artists as I reassess my own relationship as a contemporary painter with the history of art as I understand it.  As a woman, this can be discouraging.  As Bartky put it, ”…to the extent that we are not excluded from it entirely, the images of ourselves we see reflected in the dominant culture are often truncated or demeaning” (57).

Admittedly, the depictions of Eve by Rembrandt van Rijn, Hugo van der Goes, Masaccio, Albrecht Dürer, Gustav Klimt, and Hans Memling were unintentionally modified in the process of evoking and confronting them.  The next artwork exposes sexism even if the feminist’s hand is replaced by mechanical means of reproduction.