Today’s derailing experience comes courtesy of my studio mentor.  He pointed out that an opinion I expressed about identity politics invalidated my entire thesis.

He wasn’t wrong…but the opinion I voiced this morning was less nuanced than the one I would have stated if given more time.

To give the appropriate visual context, here are snapshots of the unfinished projects that prompted this discussion: 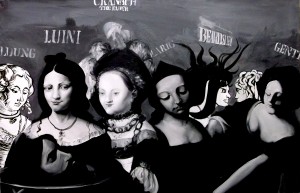 The strategy for this painting is to mash together well-painted but misogynistic paintings of women.  Both the narrative and the depictions of Salome had qualities which I found troubling when regarded as a group.  In all cases I object to the slut-shaming characterization of women as two-dimensional femmes fatales.  (I have paired this theme with that of Mary in the past.)

I removed their color to unify them visually.  Labeling them by their artist’s last name pointed out the fact that these are depictions of women by men (with one exception).

This pair of drawings takes a similar approach with depictions of Eve by Rembrandt, Hans Memling, Masaccio, Albrecht Durer, Gustav Klimt, and Hugo van der Goes.  This case addresses the toxic concept of women as sources of sin.  Related concepts include victim blaming and the idea of women as the authors of original sin (via Eve).

In this diptych, the plaid-clothed figure represents myself confronting this topic.  I and my opinions are always implied by my choice of imagery and physical involvement in repainting it, but this approach is more direct than the painting.

So.  That was the context of our discussion.  What I said was that I believe all artists have the right to paint things outside our direct experience.  If we only ever depict or read about our own point of view, our stereotypes go unchallenged and our empathy dies of disuse.

As my mentor correctly pointed out, that opinion authorizes men to paint women.  Men absolutely have the right to paint women.  They should paint a variety of subjects.  So should I.  Doing a series of paintings objecting to men doing that would then be nonsensical…

…but there is a critical second part to this morning’s opinion.

The significant nuance is this:  I reserve the right to defend myself against false accusations.  Art has the power to affect those who see it in profound and subtle ways, so as an artist I need to be particularly and acutely aware of the ideas that art history perpetuates.  When I see a strain of superbly painted artworks that support harmful stereotypes, then it is my duty to refute it.  Destroying paintings would be as horrendously unconscionable as burning books.  Making art to argue my side is completely appropriate.

Men deserve to have a voice, women as well, and through dialogue we correct one another.  My interest in feminism is that of making certain that all our stories can be told.  What I often term feminism is synonymous with egalitarianism.  I term it feminism because my biology and experiences cause me to feel the need for equality most acutely in terms of gender.