I was recently asked about the top three ideas or theories from this year’s massive pile of academic reading.

“…since no paradigm ever solves all the problems it defines and since no two paradigms leave all the same problems unsolved, paradigm debates always involve the question:  Which problems is it more significant to have solved?” (Kuhn)

Thomas Kuhn’s book The Structure of Scientific Revolutions haunted me this year.  He popularized the phrase paradigm shift and applied them to science and politics, but in a roundabout way the concept helps me consciously navigate the irreconcilable schism between faith and rationality.  (This application is neither suggested nor advised directly in the text.  The introduction suggests that Kuhn disapproved of applying his Structure to even the social sciences.  I disagree.)

The idea that entire branches of science (quantum mechanics, are your ears burning?) evolve to reconcile the fundamentally irreconcilable always reminds me of transcendentalism, gnosticism, or ineffability.  “You can’t know, because you are incapable of knowing…but when you know, you will know.”  It is goofy, but it also fits any category of understanding or maturity that requires lived experience rather than communication through direct language.

I half expected my current painting series to lead me to a decision between rationality and religion.  This possibility of two things being simultaneously true and mutually incompatible fascinates me far more than choosing between or reconciling them.

“…mythology is not a lie, mythology is poetry, it is metaphorical.  It has been well said that mythology is the penultimate truth–penultimate because the ultimate cannot be put into words.  It is beyond words, beyond images, beyond that bounding rim of the Buddhist Wheel of Becoming.  Mythology pitches the mind beyond that rim, to what can be known but not told.” (Campbell 206)

Joseph Campbell’s The Power of Myth helped me clarify the relationship between myths (religion, and other figurative and allusive discourse) and rationalism as one of paradigms rather than a zero sum game.  His detached and academic passion for these myths is also an example of how an individual person could balance or find value in multiple paradigms.  His approach to mythology shows how a thoughtful person can find value in old stories without having to treat them as factual.

I also notice myself frequently mentioning Baudrillard’s observations the paradox of iconoclasm in Simulacra and Simulation.  It was a relatively minor example to support his initial introduction, but the irony that the power of icons is most emphatically asserted by those destroying them was compelling.

This approach to iconoclasm relates to my work because I notice how uncomfortable this series makes me at times.  Paying attention to this discomfort forces me to identify and confront its sources.  I learned that I fear the vulnerability that accompanies candidness, the consequences of broaching impolitic subjects, and the humiliating possibility that I have been engaging in toxic doublethink my entire life.  These fears were far more powerful when I pretended they didn’t exist.

The other books have been useful as well.  Generating thorough book responses like the one I did for Kristeva’s Severed Head would be impractical, but perhaps brief annotations will suffice.

The Red Rose Girls offers a highly readable and fascinating glance into the changing opportunities and restrictions for female artists in the early twentieth century.  (This came up in a previous post.)

The effects of Violet Oakley’s religious beliefs on her art were particularly fascinating to me because I am familiar with the religion in question.  The ways in which it both helped and hindered her were presented in fairly neutral language.  (The author plainly did not agree with those beliefs, but it is equally evident that she carefully researched them and looked for the value Oakley derived.  In more concrete terms, Oakley’s religious faith guided and sustained her artistic practice and themes, but it also led to a rupture between herself and her artistic companions Green and Smith.)

As I consider the relative merits of faith-based and rationalist worldviews, it is helpful to remember that neither is wholly helpful or dangerous.

This book is exhaustive.  The literary style pairs form to content in this long text.  This author is skilled at twisting phrases and establishing puns that support multiple topical meanings (and that’s the only sort of punning I can stomach).  The biggest surprise for me was how few of his examples were from art history.   He barely touched on the like-but-unalike ramifications of trompe l’oeil, and didn’t even get into photorealism and pop art.  That just leaves more room for me to find my own body of examples. 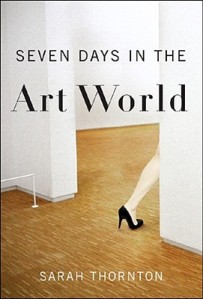 Thornton’s presentation of the different ways in which art insiders operate, establish hierarchies, and develop value judgments can be fascinating.  Several of the perspectives were well outside of my experience.  As a young artist of modest means, biennales, art auctions, and museum prizes are foreign to me.  Even the studio visit was a bit alien, as I have never worked in a studio organized on the workshop model.  (I have wished for minions assistants, but in my more solemn moments I doubt my ability to delegate should I ever have the opportunity.)

The critique chapter left me grateful that my next group critique is months away.  I prefer critiques that work more like brainstorming sessions than oral defenses of one’s work.  It’s much easier to keep my defenses lowered and my enthusiasm unforced in a small group session.

Seven Days took less time to read than any other book I read for grad school.  The relative absence of jargon makes it easier to recommend than the others.  Interesting as it is, however, I have not yet determined how to use it in my studio practice.