On August 2, I was allowed to use the window display space on the 8th floor of 333 S. Broad St. (aka the floor on which all the MFA painters have their studios).  In the window hung an ambiguous love letter from which dangled impressions of each seal design I have thus far.  (Each represents an interest or quality I find significant, so it almost asserts that the love letter comes from many versions of myself.)

The format lightly references both Duchamp’s  Étant Donnés and the much-sealed letter to the Pope requesting a divorce of Henry VIII from Catherine of Aragon.

The row of letters are my copies of the sequence of letters posted to my classmates.  I “borrowed” back one such letter that a classmate had marked up with her investigative notes.  This pedestal is right in the foyer when people exit the elevators, and as such is quite conspicuous.

I later gave her a bonus wax artwork.  She did solve it first, after all.

The rest of the show is very passive and dependent on the observation skills of people passing by.   I enjoy giveaway art as much as mail art, so I also had a pile of wax seal samples to give out. 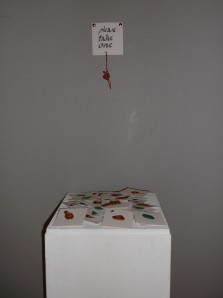 Over the following week, I experimented with taking a pedestal away every day or so.  For the last few days, the only thing on display was the hand-lettered sign behind the black peephole barrier.

Overall…it was a very satisfying art project.  It took a lot of work, but I (and, I think, my classmates too) had fun.  I certainly had a great chance to start thinking about tongue-in-cheek staging.

This will probably be an aspect of my thesis show (a million years from now…mark your calendars).